A building’s users tend not to worry about damage to its structure until it has actually occurred – too late, because repairs involve a lot of work and are often very expensive. For this reason, one of the fundamental activities in building physics research is that of testing building materials, evaluating their properties, identifying their weak points and finding ways to overcome them before the materials are used for building. In the Hygrothermics department at the Fraunhofer Institute for Building Physics IBP, Dr. Cornelia Fitz leads a research group that studies the hygrothermal properties of materials and their behavior under moisture load conditions. “Builders and their clients need to be reassured,” says Fitz before going on to explain: “For example, moisture that seeps into brickwork when it rains and is unable to dry out will cause damage to the wall in frosty weather.” This and other forms of degradation are something that both manufacturers and building users would prefer to avoid. The test facilities at Fraunhofer IBP therefore include five controlled climate chambers and a large outdoor testing site, allowing the hygrothermal behavior of building materials to be investigated both in the laboratory and under real climatic conditions in the field.

One of the main areas of work for which Fitz and her team are responsible is determining the characteristic moisture properties of different building materials. Such data are required, for example, for the certification of new building materials and are also being used to an increasing extent for computer simulations in the planning phase of construction projects. Fitz and her team of scientists carry out tests on an extremely diverse range of materials – from cellular concrete and wood to composite thermal insulation systems. 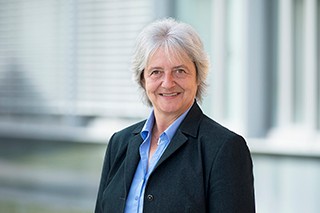