The surrounding buildings are reflected by them, sometimes plants wind their way up to dizzying heights, or movable elements create waves at high walls, thus visualizing the wind: It is about high-rise building façades. They are the architect’s business card and a visible expression of his design. Building façades meet numerous functions: They protect the interior of the building from weather conditions, they insulate the building and thus help to increase energy efficiency. Beyond these elementary tasks, however, they also realize comfort requirements, for example by controlling the light incidence and shading and implementing acoustic aspects such as sound insulation.

However, façades also entail undesirable aspects: In high-rise buildings for example, people hear flow noise caused by the wind. Due to the large size of the façade areas, the flow noise can partly reach such a high sound level that the well-being of the people inside the building and outside in the immediate vicinity can be affected. This does not necessarily require medium or high wind speeds. Even a gentle breeze can already cause a distinctive noise that may be much more annoying, as it stands out more clearly from the background noise.

How the design of the façade and the resulting noise are related and interact with each other can be investigated both mathematically by CFD (Computational Fluid Dynamics) or CAA (Computational Aeroacoustics), or by tests carried out in the wind tunnel. Researchers at the Fraunhofer IBP install façade sections as test specimen in the wind tunnel at the Fraunhofer Institute and analyze their acoustic properties. If the size of the façade section is small enough, it can be placed in the closed measurement section of the wind tunnel. The researchers investigate larger objects, with the measuring section open, both in the reverberation room and at the opening of the wind tunnnel itself. A beamforming microphone array helps to visualize and localize noise sources that are caused by the air flow around the test specimen. Larger façade sections are placed and analyzed directly behind the outlet nozzle of the wind tunnel having a size of about five square meters. The researchers examined for example a wave-shaped façade and optimized the material and suspension. Based on the gained results no additional noise source was to be expected and the planned design of the façade element could be retained. 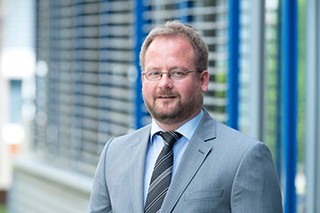